The walled old town of Korčula with streets arranged in a herringbone (which allows easy air circulation, but it also protects against strong winds) is exposed near the reefs. Construction of the walls was forbidden until the 18th century, wooden drawbridge was not replaced until 1863.

All streets are stepped straight (with the exception of those which lead along the southeastern walls where people should pay attention where they step). The city has several historical monuments: the Roman Catholic Cathedral of Saint Mark (built 1301-1806), the Franciscan monastery from the 15th century, the People’s Assembly chambers, the palace of the former Venetian governors, noble palaces of local merchants and massive fortifications. 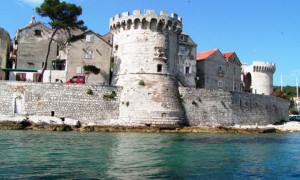 Devoted Catholic inhabitants of Korčula keep old folk festivals (including the church), for example Moreska – war game of the middle Ages organized throughout the Mediterranean. The city is also known by its Regulation of 1214, which was the first in the world that have banned slavery. If you are a lover of history and culture, you should definitely visit this beautiful island in the Adriatic Sea – Korčula.