The Island of Mljet – Green Island

The island of Mljet also known as the “Green Island” is located in the southern Croatian, 30 km northwest of the world famous town of Dubrovnik. Mljet is famous for its legends and stories, as well as a sanctuary for the Mediterranean monks. The Western part of Mljet was proclaimed National Park.

sland of Mljet is nestled in the centre of Europe in a country Croatia uniquely warm due to its mediterranean climate, which makes it perfect for recreation and leisure. Croatia, a pioneer in nature-themed resorts, is renowned for its scenic coasts and beautiful beaches. Tourists from all over the world marvel at how breathtaking the islands are in this part of Europe, that every time they take a tour of the continent they make it a point to visit the Adriatic coast Croatia to have a fantastic time. One of the most popular islands that they boast is Mljet island and its National Park.

The Mljet National Park features two salt lakes: the great and the small lake (Veliko i Malo jezero) connected with the open sea via narrow straits. In the midst of the Great Lake lies a small islet of St. Mary housing a Benedictine monastery from the 12th century.

Getting to the island of Mljet

Dubrovnik and Mljet are connected with daily ferry lines. Timetables can be find at Jadrolinija’s web site. The journey takes some 2 hours and 30 minutes. You can also take the hydrofoil “Nona Ana” from Dubrovnik to Mljet which sails into theport of Sobra and during the summer it also makes a stop in Polače located near the Mljet National Park.

What make it out of the ordinary are its two saltwater lakes called Veliko and Malo Jezero, and the fact that Mediterranean monks treat it as their home – they settled on the island of St. Mary in the middle of Mljet within a Benedictine monastery. It is very accessible to travellers since there are ferries daily going from Dubrovnik to Mljet. Described as the “most beautiful and most forested island in the Adriatic” by the Croatian National Tourist Board, its biodiversity may be appreciated by nature lovers with various flora and fauna abound the island, exceptional natural artwork which is not normally found on the usual coasts.

Odysseus Cave on the Island of Mljet, Croatia 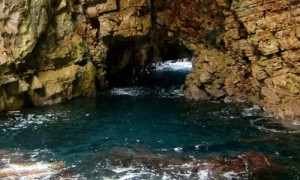 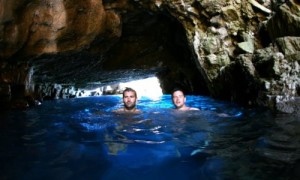 The legend of Odysseus is now attributed to the island of Malta, and not Mljet, probably due to their similar names. The cave is a few tens of meters wide. There is the collapsed vault and the bottom is covered with sea water. The cave can be entered by the sea, swimming or by smaller boat, because the entrance is about 4-5 meters wide. Tunnel cave is about 20 meters long, and the depth of the sea is about 10 meters.

You can come to the Odysseus Cave by land, but you have to use very steep stairs. If you find yourself on the island of Mljet in the summer, you should go to the cave around noon because then the sunlight creates a spectrum of colours in the sea. Photographers will love this natural phenomenon. Research shows that Mediterranean monk seal used to stay in this cave.